It sometimes happens that some natural landscapes seem to have come up directly from the illustrations of a science fiction book. With the trees we are about to show you, you will probably have the same feeling: endowed with extraterrestrial charm, they are instead typical of some ecological niches of our planet. From Yemen to California, from Japan to Madagascar, we propose to you a journey across the planet in search of plants that are so rare, long-lived, or colorful that they seem to originate from another planet. 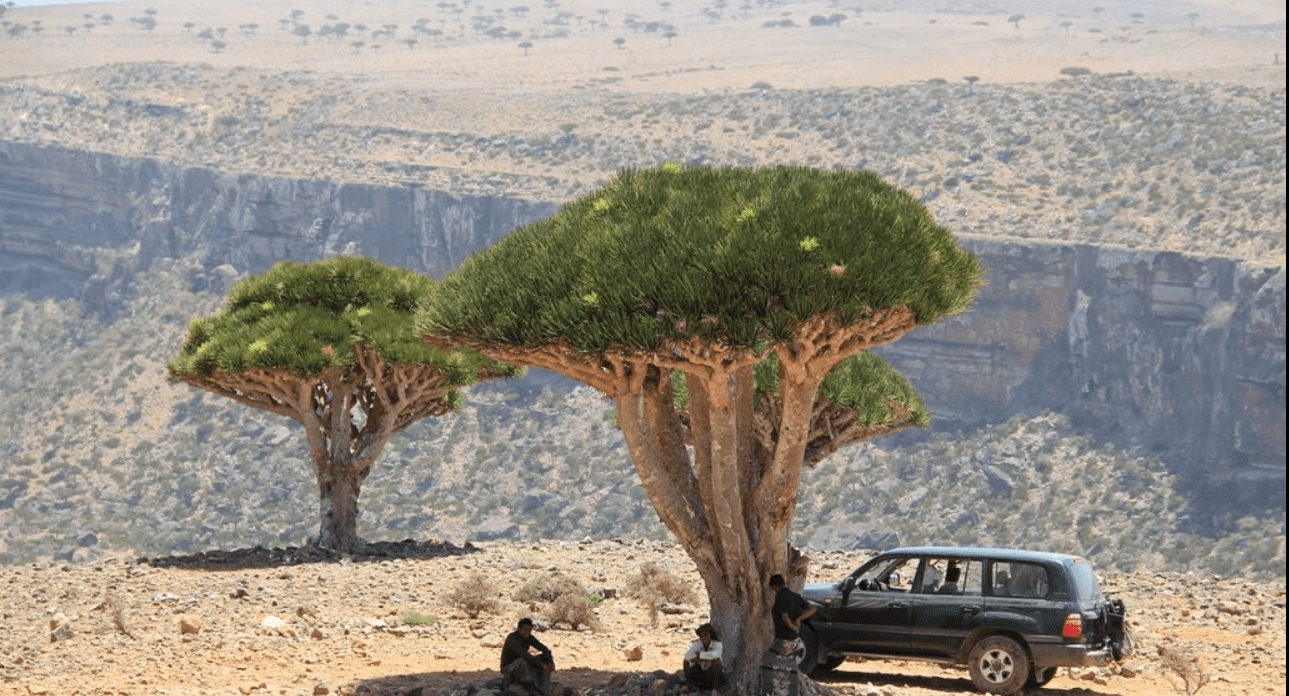 This plant from the Agavaceae family (Dracaena cinnabari) similar in shape to an inverted umbrella, is endemic to the treasure island of biodiversity in the Indian Ocean. Its flattened crown is an adaptation to high temperatures and scarce availability of soil: it reduces evaporation and protects the seeds left on the ground with its shade. The tree produces a dark red resin (the “dragon’s blood” in fact) when the leaves are cut: this is used as a perfumed essence and coloring pigment. 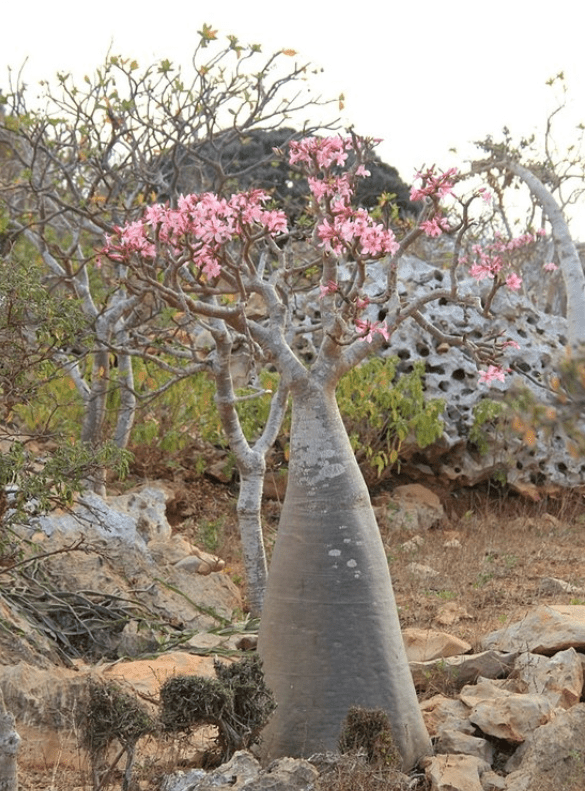 On the same island about 350 km from Yemen, which is home to over 800 varieties of rare plants, 37% of which cannot be found elsewhere in the world, there is also the bottle tree or rose of the Socotra desert (Adenium obesum socotranum) , which owes its name to the characteristic swollen shape of the base, similar to a full water bottle. Again the main feature of the plant – the bulbous trunk – is an adaptation to high temperatures: liquids and nutrients are crammed into the base. 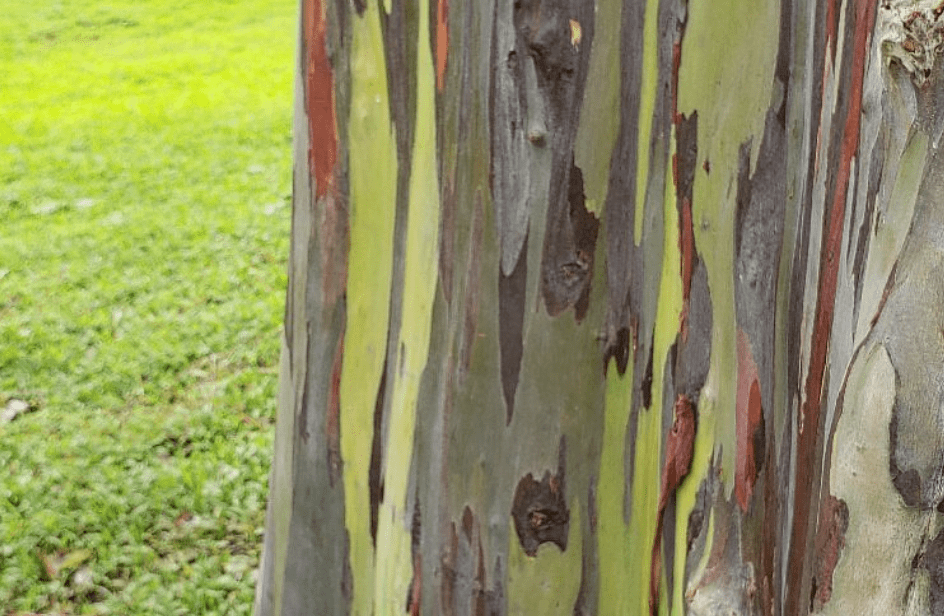 The bark of Eucalyptus deglupta, typical of some tropical forests, is changed several times during the year: when it is new and young it is of a beautiful bright green color; later it matures and becomes bluish, purplish, orange, and brown, then detaches and reveals the underlying layer. This continuous alternation produces an enchanting play of colors on the eucalyptus trunk, which is not as lively when the plant grows outside its range.

This species of aloe (Aloe dichotoma) with pointed leaves, typical of Namibia and South Africa, takes its name from the Bushmen’s habit of using its branches and leaves to build quivers for arrows. The trunk is emptied of the pulp and used to store weapons or, alternatively, to contain food: it is porous and keeps a cool temperature inside. Several bird species also appreciate the sharp shape of the leaves, and nest among these branches, which provide shelter from predators.

5 The cypresses of the Caddo Lake marshes (Texas) 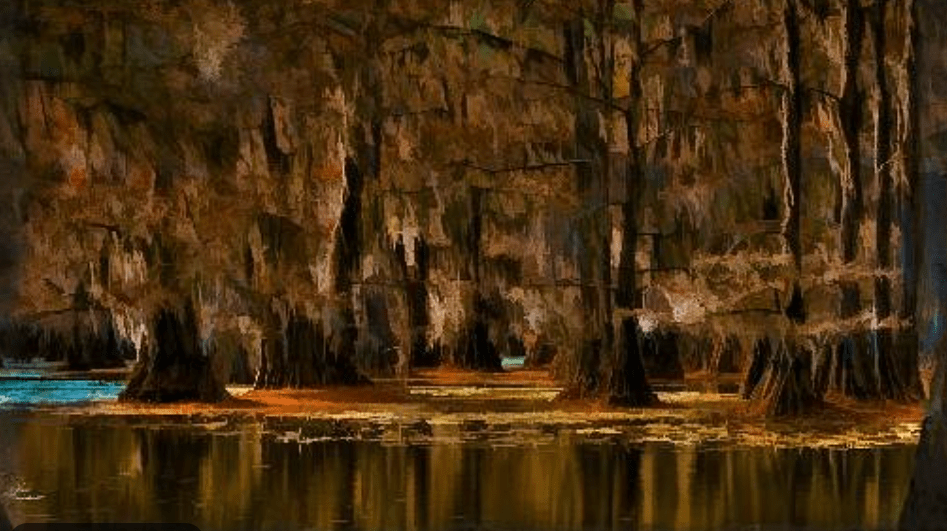 Swamp cypresses, conifers with a massive trunk about 2 meters high, grow in the muddy and oxygen-poor waters of rivers, swamps, and other bodies of water in the United States: they are found in Caddo Lake, a lakeside and marshy area on the border between Texas and Louisiana, where they form a mysterious and almost “fairytale” scenario. 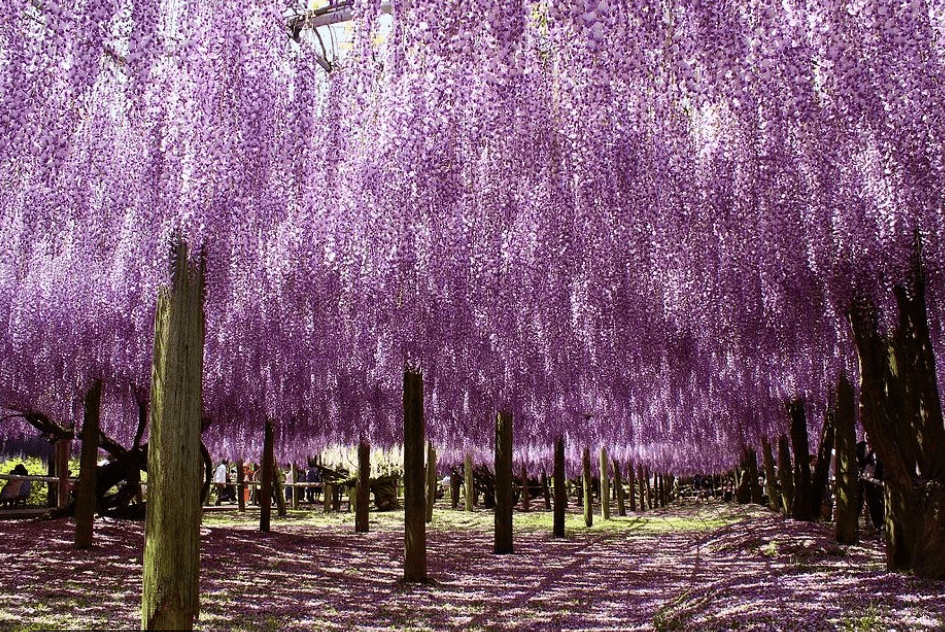 Between the end of April and the beginning of May, the wisteria galleries (gen. Wisteria) create spectacular glimpses of pink “sky” in Japan: in this case, the “alien” plants are not trees, but creepers, which also expand for 10 meters in width and 20 in height, coloring the structures of the tunnels created to support them pink or lilac. 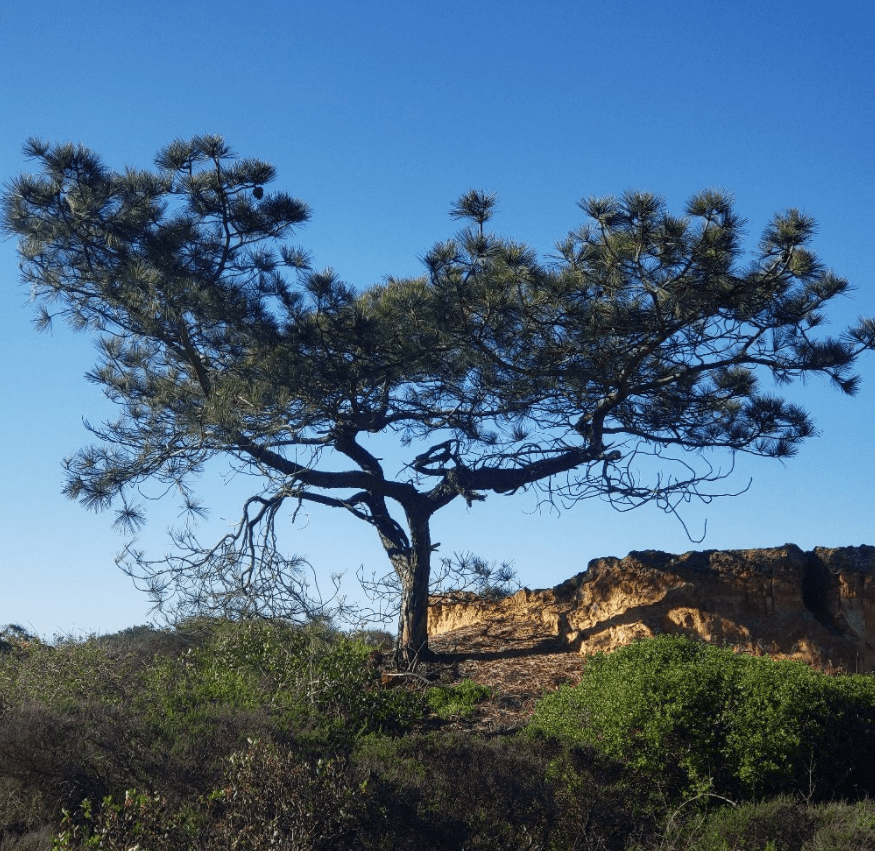 Resistant to the most extreme temperatures and arid sounds, these trees are among the longest-lived plants on Earth. The oldest living specimen of one of the three main species of this family, a Pinus longaeva renamed “Methuselah” is estimated to be over 4800 years old. It is located in a forest in the White Mountains, California, and its exact location is kept secret for fear of vandalism.

8 The baobabs of Madagascar 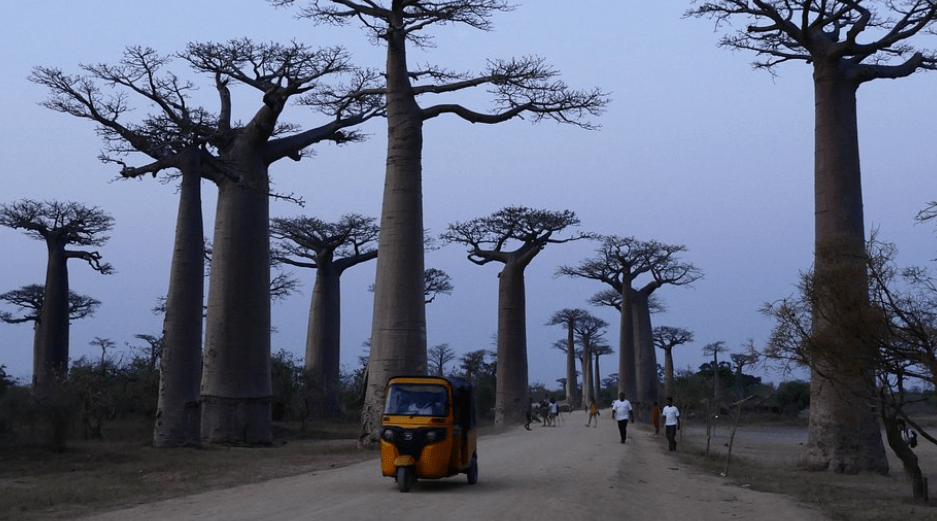 Adansonia rubrostipa is the smallest of the six species of endemic baobabs on the African island. It can reach up to 20 m in height. It is distinguished by the bottle shape and the wrinkled trunk of the younger specimens, the surface of which resembles the skin of an elephant. 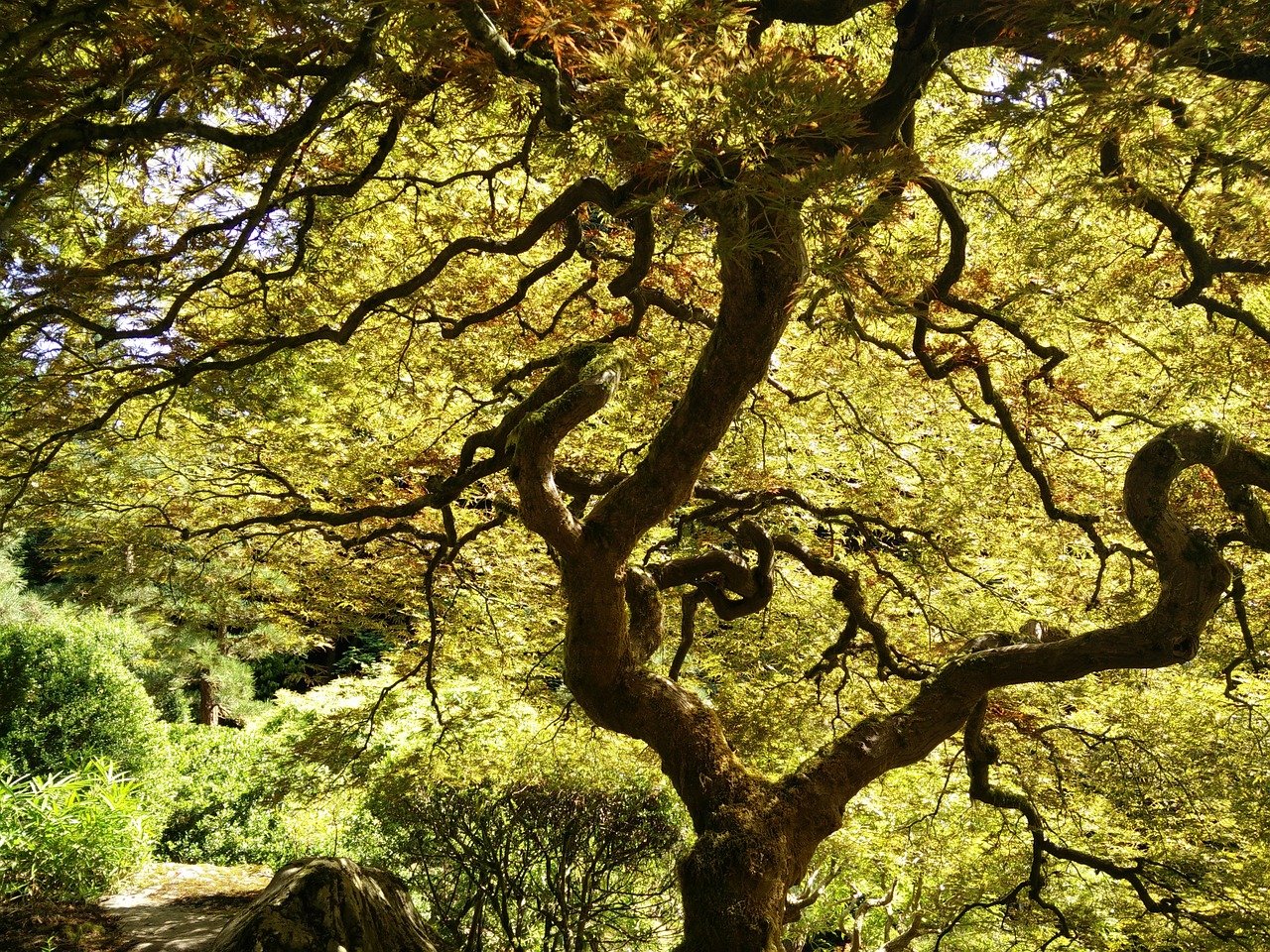 Acer palmatum, one of the symbolic plants of Japan, is surprising for the beauty of its branches, “allergic” to pruning (to which they react very badly). But above all for the bright red color, which in autumn colors the gardens that host it.

10 The trees of the ruins of Angkor, Cambodia 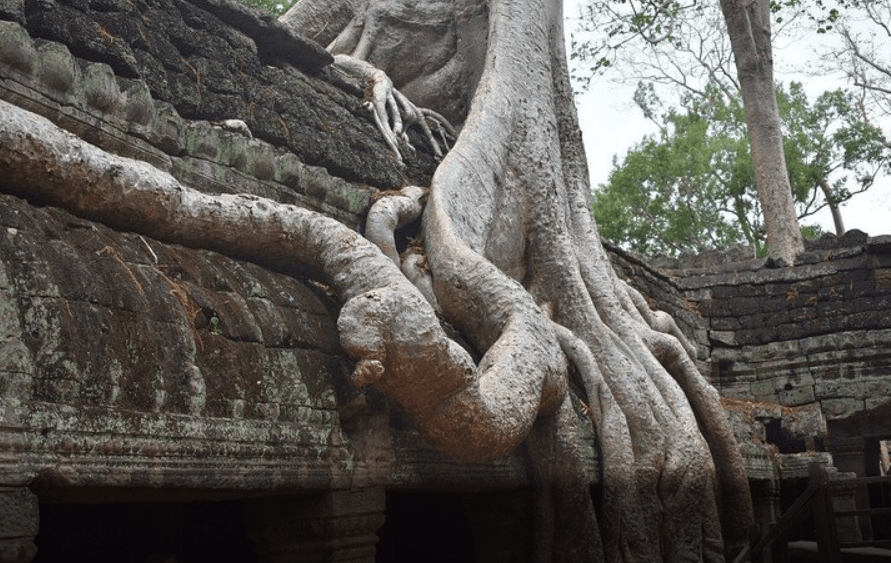 Tetrameles nudiflora is one of the two species of plants (the other being the strangler ficus) grown among the famous ruins of Ta Prohm, Cambodia. Their massive shallow roots dig into the jungles of India and Southeast Asia, sometimes engulfing precious archaeological sites, and contributing to their remote charm.